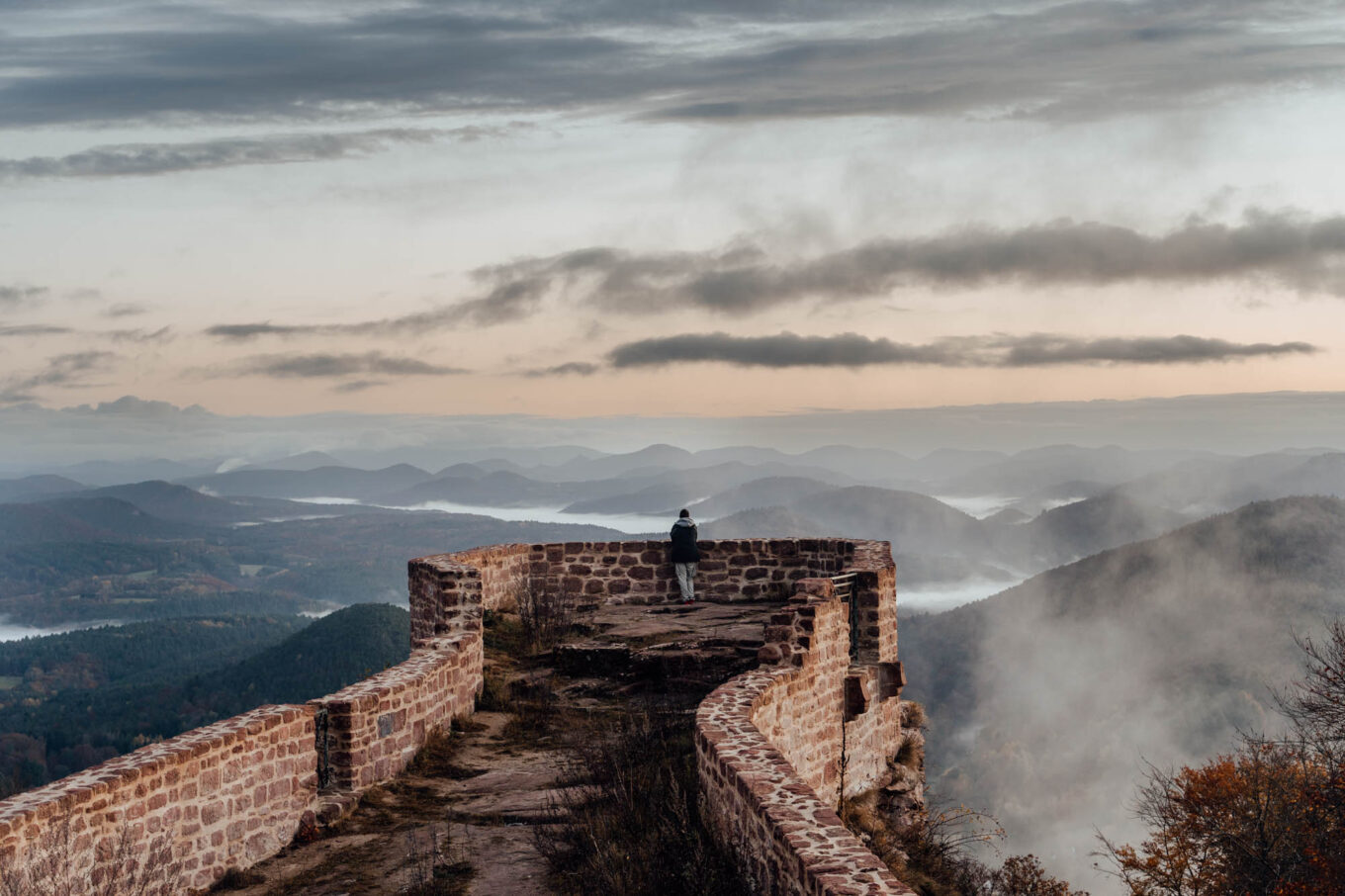 Located in a forest on the French-German border, we can find the remains of the 12th century Wegelnburg castle. Built on large sandstone rocks, the castle was destroyed several times over the centuries and is now best known for its astonishing panoramic views.

Located in the forests of the German border community of Northweiler, you’ll find the remains of the 12th-century castle Wegelnburg. The castle was initially built by the Hohenstaufen dynasty to preserve the border of their territory.

When we look back at the writings of that period, we note that it was first mentioned in 1247. It was already taken in 1272 by the troops of the Prince-Bishopric of Strasbourg and subsequently passed into the hands of Rudolf I of Germany.

Thanks to his funding and his ministers’ help, the castle was expanded over the years. In 1330, the castle was pledged to the Electoral Palatinate, and finally, in 1417, the castle came into the possession of the dukes of Palatine-Zweibrücken.

Throughout the 16th and 17th centuries, the castle was attacked several times by the French troops, after which it was regularly repaired and enlarged. Eventually, it was heavily damaged by the imperial mercenaries during the Thirty Years’ War at the end of the 17th century.

According to the literature of that time, the current remains of gates, buildings, large rock chambers, and circular walls date from that time.

Wegelnburg is currently surrounded by fencing, but it is still possible to visit the ruins.

Our visit to Burgruine Wegelnburg

We visited Wegelnburg as part of our Camptoo road trip, during which we traveled through Europe for a week in a campervan including Schloss Lichtenstein, Santuario Madonna Della Corona, and Veves Castle.

We arrived at Wegelnburg on a cold winter night, and because there was a clear sky, we decided to look at the stars and enjoy our night. While we were stargazing and exploring the area around the Castle, our electronics were charging in our motorhome using the Ecoflow River Pro power station.

Although the parking was not equipped with electricity poles or showers, we spent the night in our camper (wild camping) until the following day.

Please note: during our nighttime hike to the castle, we encountered several wild animals in the distance, from wild boars to a family of deers. The walking path is not lit at night, so it is best to bring a flashlight if you’re planning to do the same. We helped ourselves with our Nanlite PavoTube II 6C lights.

How to reach Burgruine Wegelnburg

The ruins of Wegelnburg are located in the middle of the Palatinate forest, which means you’ll need to hike towards the ruins. It also means that it’s surrounded by nature, which creates a fantastic atmosphere when the season changes.

So be sure to pay attention during autumn and winter, as the road to get there can get very muddy.

We parked at the Wanderparkplatz Nothweiler during our trip and followed the zigzagging hiking trail to Wegelnburg. This route is around 5 kilometers long, regularly crosses the German-France gens (so cell phone connections are cut), and passes several sights on its way: such as Loewenstein Castle ruins and the Buntsandstein Felsen.

It was only on our way back that we noticed a shorter hiking trail, which started in a straight line to the village (at 13 Lembacher Str.). From there, it is only a 200 meters walk to the Wanderparkplatz Nothweiler.

Because Nothweiler is a border town with France, there are hardly any options to visit this place by public transport.

The Wegelnburg is located on top of a mountain, making it a subject that can be admired from different points of view in the wider area.

Most photographers choose to capture the ruins during the morning, which allows them to witness the sun rise above the fog from a beautiful point of view.

What to do at Wegelnburg

The region around Schloss Wegelnburg is known for its hiking paths, mountain bike trails, and medieval rock castles. That makes it easy to combine them or turn a visit to Wegelnburg into a full-day activity.

Other attractions near Burg Wegelnburg

In Germany’s Palatinate forest, and just across the border into France, you can find several castle ruins dating back to the 12th and 13th centuries. This makes it easy to spend an entire day visiting Wegelnburg and its neighboring attractions.

What to pack when visiting Wegelnburg ruins

A visit to Wegelnburg ruins and its surrounding castles can quickly take up a full day, making it handy to bring some essentials with you.

What to pack when visiting Wegelnburg ruins

To photograph the Wegelnburg, you’ll want to take the weather and its seasonal conditions into account: A colorful forest or a snowy landscape is so much more helpful to create a unique photograph than when the leaves have already fallen.

One thing is sure: the Wegelnburg ruins are the highest situated castle ruin in the Palatine Forest, which makes it the best spot of the area to witness the sunrises.

Droning around the castle is allowed as long as you follow the new 2021 EU Regulations.

Since 31st December 2020, new European Drone Regulations are in effect. Read our summary of these EU drone regulations to understand how it impacts you and your drone.