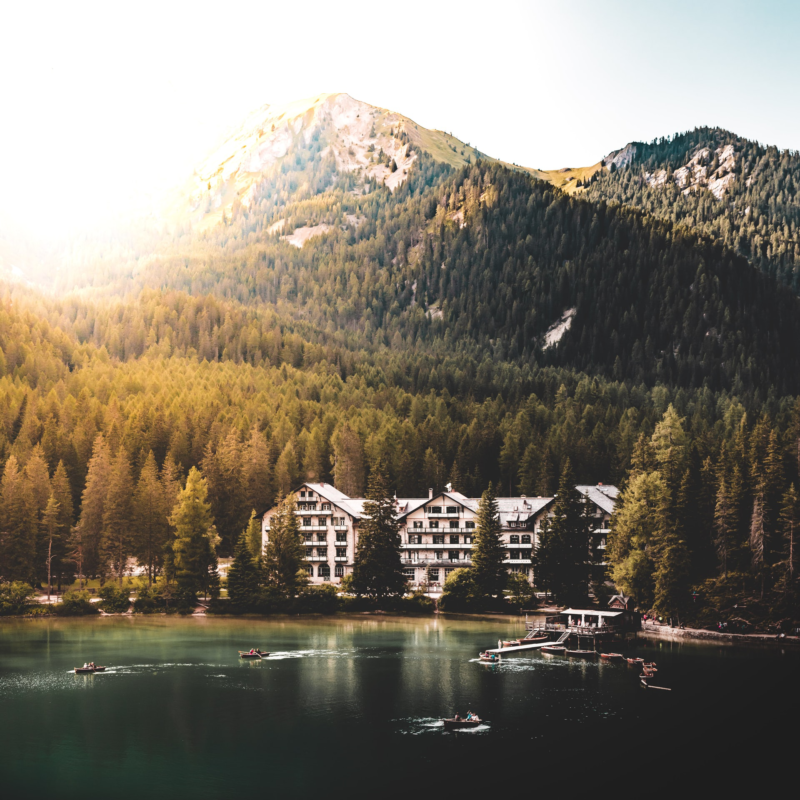 Lago Di Braies is a legendary lake located in the Dolomites, which still contains many mysteries. We visited the lake and listed its history, its legends, and how to reach it.

Lago Di Braies – also known as Pragser Wildsee – is the biggest lake in the Dolomites, and is known as the most beautiful lake of the Alps.

Due to its photogenic emerald-color, unique boathouse, beautiful pine forests, and towering limestone peaks, the lake was recognized as a UNESCO Heritage Site and became a known instagrammable place (“Lago di Instagram”), which is why it attracts thousands of visitors every day. So don’t be surprised by the number of visitors that show up. In fact: try to outsmart the hundreds of photographers by showing up early.

The lake – which counts a few different and extensive legendary stories – has played an extensive role in World War 2, of which the small chapel on the west side of the lake is a remainder. The chapel was built in 1904 but was used as a meeting place for prisoner exchanges of inmates that were transported to concentration camps.

In addition to its own chapel, the lake also houses its own hotel where you must book a minimum of 3 nights, but in return, you get access to a beautiful observation deck with a view of the lake and the mountains behind.

What to do at Lago Di Braies

Due to the number of activities around the lake, the lake can be visited all year round. In addition to photographing the lake, you can rent a boat, take a walk or a hike, visit the chapel, have a picnic, or even go swimming.

How to reach Lago Di Braies

Lago Di Braies is easily reachable by car and the lake has the infrastructure for the thousands of visitors arriving by car: there are 3 parking lots with hundreds of parking spaces located next to the lake.

It is guaranteed that during the busy summer period the parking lot will be full, that’s why it’s mandatory to book your visit in advance. That’s why the parking list costs €10,- per car with reservation and €20,- per RV (night stay included, but no services).

Mythology within the Dolomites region of Italy is current and important, which is why it shouldn’t surprise you the lake has a few of them. The most ancient and local legend, with as origin the south end of the lake just below the imposing Croda del Becco (“Seekofel Mountain”). This is where – according to the legend – the gate to the Fanes underworld was located, and could only be reached by boat.

The legend of Lago Di Braies and the fanes

According to this legend, the area that is now the Fanes-Sennes-Braies Nature park was home to a peaceful Kingdom in which its people were allied with marmots (large ground squirrel-types of animals).

The Queen of the Fanes decided to marry a foreign king, after which a twin of girls was born; Dolasila and Luianta. The day after their birth, Luianta disappeared from the crib and a marmot was found in her place. A few days later the king ordered his guards to take the twins to the foot of the Nuvolau mountain, where the eagle was supposed to choose one of the twins. The eagle picked the marmot, after which it rose into the air and landed for a brief moment on a rock, with the result that the little marmot escaped and hid under a rock.

Years turned by, while the power-craving king turned daughter Dolasilla into a powerful warrior to expand his kingdom. In return for helping the dwarves into the battles, Dolasilla was given invincible armor and unfailing arrows. However, this gifted armor came with one condition: its powers would disappear if Dolasilla were to ever marry.

You may have guessed it: after many conquests to expand her kingdom, Dolasilla met an enemy warrior, Ey de Net, and fell in love after which they would eventually get married.

Fearing the end of his kingdom, the king disagreed with the marriage and betrayed Dolasilla by selling her and the inhabitants of his land to the enemy kingdom, in return for which was allowed to enter the legendary land of Aurona.

After the deal, The king flees and Dolasilla decides to fight the enemy in a chance to save her people but she gets killed in battle. The traitorous king was cursed and turned into stone … and the surviving Fanes found shelter with the marmots living inside the mountains surrounding Lago Di Braies.

According to the legend, the surviving Fanes continue to wait up to this day, until the sound of a silver trumpet would mark the rebirth of their Kingdom. Additionally, the boat with the missing princess Luianta would appear on the lake once a year, waiting for a sign that the kingdom has been reborn.

The legend of Lago Di Braies and the gold

Another legend of Lago di Braies – which has a much more recent history – is the story in which the Nazi’s supposedly sank over 10 tons of gold to the bottom of the lake when the second World War ended.

According to this Legend, the Nazis transported the boxes with gold to the edge of the lake, first by a military vehicle and then by horse-drawn wagon, to sink them. This because the US troops were closing in and Germany was on the brink of collapse.

The story is the cause of numerous treasure-hunting expeditions, several mysterious deaths, and inspired plenty of books.

We visited Lago Di Braies during the winter, when the water dropped which made the boathouse raised even more over the water. The lake itself was covered by a thick layer of ice, making it walkable for visitors.

Because of the huge amount of visitors, we would advise you to come at sunrise for the best photographic vibe and to avoid the tourist crowds.

If you’re mainly visiting Lago di Braies to capture pictures, we’d advise you to walk around the lake – which is a 3km loop – and has many different points of view on the lake, the hotel, and the Chapel.

Many tourists and photographers decide to reenact the legend of the fanes by renting a boat (18 euro for 30 minutes boat trip and 28 euro for an hour) and rowing to the middle of the lake.

During our entire road trip around the Dolomites, we’ve been using different cameras to capture the atmosphere. Here is a list of the gear we’ve used: