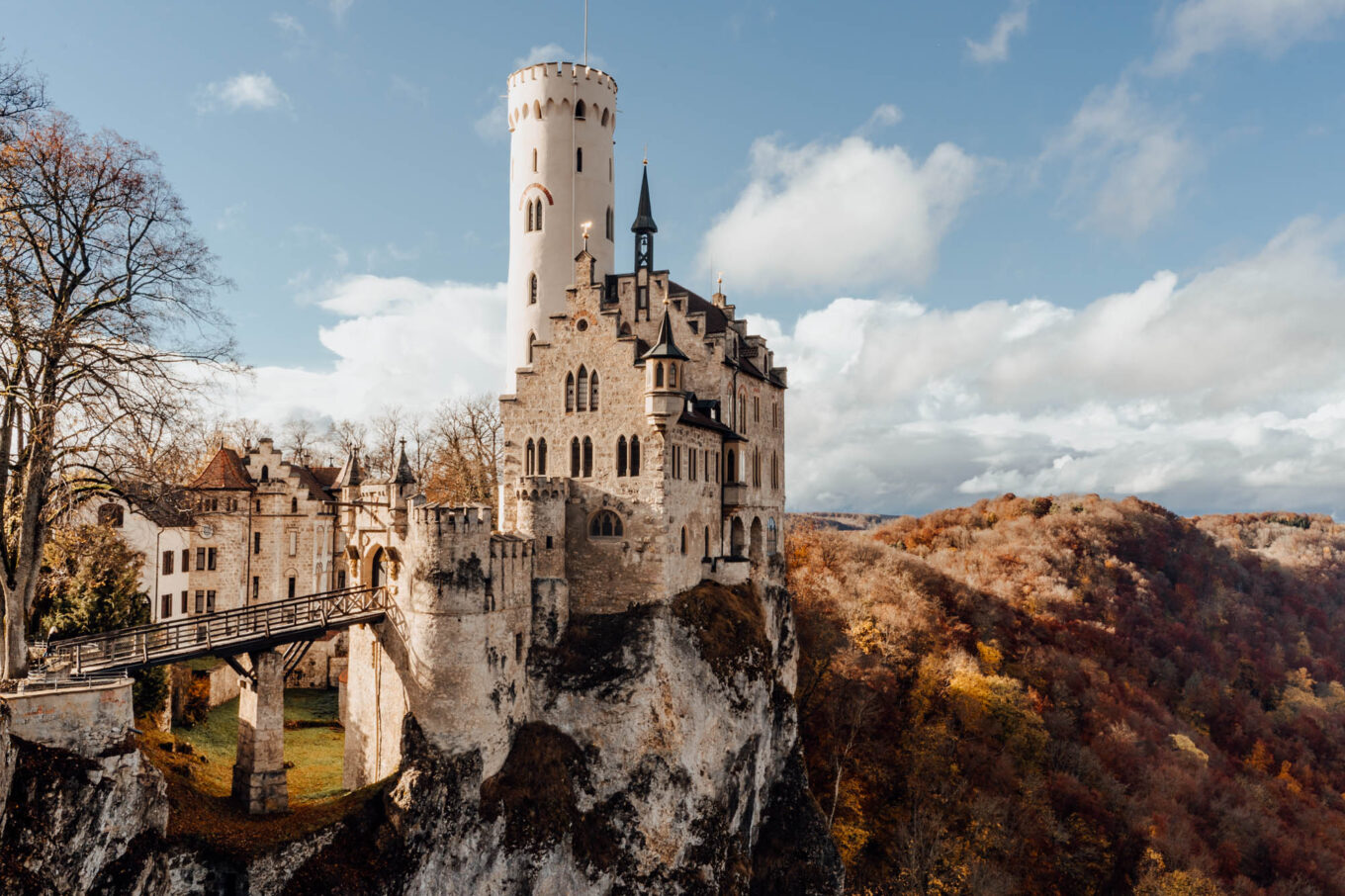 Schloss Lichtenstein was built by Count Wilhelm, inspired by the novel Lichtenstein. Its unique location – the top of an 800 meters-high cliff – makes it one of the most stunning structures in the region.

We visited the castle, so here is its history and how to reach it.

Lichtenstein Castle has its origins in the 12th century when the Lords of Lichtenstein decided to build a small fortress on their land. This location was on top of the Württemberg cliff and near the origin of the Achaz river. The fort has no connections with the tiny European nation of Liechtenstein as it takes its name from its first owners and is located in the region of Stuttgart, Germany.

Although the fortress was located on a rather strategic point, it was destroyed twice during the civil war in 1311 and 1377. The ancient literature mentions that the Lords of Lichtenstein were not that loved in the area, and therefore we’re constantly under attack from the citizens of the Free Imperial City of Reutlingen.

It took until after the second siege before they thought about rebuilding the fortress again, which got a new – rather unique – location almost 500 meters away. They also decided to make the new fortress bigger and better equipped to better withstand any further attacks.

This new castle was completed in 1390 and functioned as one of the most substantial and most impressive fortifications of the Late Middle Ages. On the one hand, because it was protected by a steep cliff, on the other hand because it had many new and modern military features (such as casemates), making it impregnable, and withstood every single attack.

The Lichtenstein family lived in the castle until the year 1567, after which it was neglected. More than a century later (in 1687), the last heir of the Lichtenstein family died in the Great Turkish War, making the castle the property of the Habsburg family. Unfortunately, the Habsburg family did not maintain the castle either, which caused it to fall into the possession of King Frederick I of Württemberg, who is 1802, decided to dismantle the entire building and replace it with a hunting lodge.

When the German novelist Wilhelm Hauff published his historical novel Lichtenstein in 1826, giving the original castle of Lichtenstein a significant role, Count Wilhelm von Urach bought the hunting lodge from his cousin and started to reconstruct the original fortress.

The new castle was built on the ancient foundations of the 1390 castle and was built three stories tall. The castle got a courtyard, surrounding walls, and various adjacent buildings and facilities to protect the castle.

The new neo-Gothic castle was finally inaugurated in 1842, with a ceremony that even included the king.

In 1848, Count Wilhelm improved the castle’s defenses and fortified the castle even more through various caponiers and cannons. The castle continued to be expanded after Count Wilhelm’s death; the Ducal Palace and the old groundskeeper’s house were added in 1901.

The castle survived World War II with a bit of luck: an American tank passed through the valley and fired directly at the main tower. Fortunately, the shell failed to explode, which saved the great building from destruction. The castle tower still has a hole in its plaster as a reminder of where this cannonball struck.

Today the Dukes of Urach still own the castle; however: it is managed by the Wüstenrot Foundation and the Community Fund for the Preservation of Lichtenstein Castle. They also took the lead in the restorations of 1980 and 2002, where the castle got its current appearance.

How to reach Schloss Lichtenstein

Schloss Lichtenstein is located quite remote in the mountains, so there are only a few options for getting there by public transport.

When to visit Lichtenstein Castle

Schloss Lichtenstein is located in the middle of nature, which means that during the spring and summer, the surrounding landscape is overwhelmed with green colors, making the castle extremely appealing.

Personally, we prefer visiting the castle during autumn, because the surrounding trees, hills, and valleys will all have a fantastic color palette that goes from yellow and orange to red.

That’s why we visited Schloss Lichtenstein as part of our Camptoo road trip, during which we traveled through Europe for a week in a campervan and visited Wegelnburg, Santuario Madonna Della Corona, and Veves Castle.

While we were exploring the area around the Castle, our electronics were charging in our motorhome using the Ecoflow River Pro power station.

As usual, the castle is always closed in December and January. During the other winter months, it is usually only open on weekends.

What to do at Lichtenstein Castle

The region around Schloss Lichtenstein is known for its hiking paths, making it easy to turn a visit to Lichtenstein Castle into a full-day activity.

Other attractions near Schloss Lichtenstein

You can find some of Baden-Württemberg’s most impressive observation towers and ruins around the castle. This makes it easy to spend an entire day visiting Schloss Lichtenstein and its neighboring attractions.

What to pack when visiting Lichtenstein Castle

A visit to Schloss Lichtenstein and its surroundings can quickly take up a full day, making it handy to bring some essentials with you.

To photograph the Lichtenstein Castle, you’ll want to take the weather and its seasonal conditions into account: A colorful forest or a snowy landscape is so much more helpful to create a unique photograph than when the leaves have already fallen.

The area is marked as a no-fly zone, which is also clearly stated on the surrounding fences. This means that drones are prohibited on the entire site of the castle, including the park and the parking lot. Nevertheless, you can find several drone videos of the Castle online.