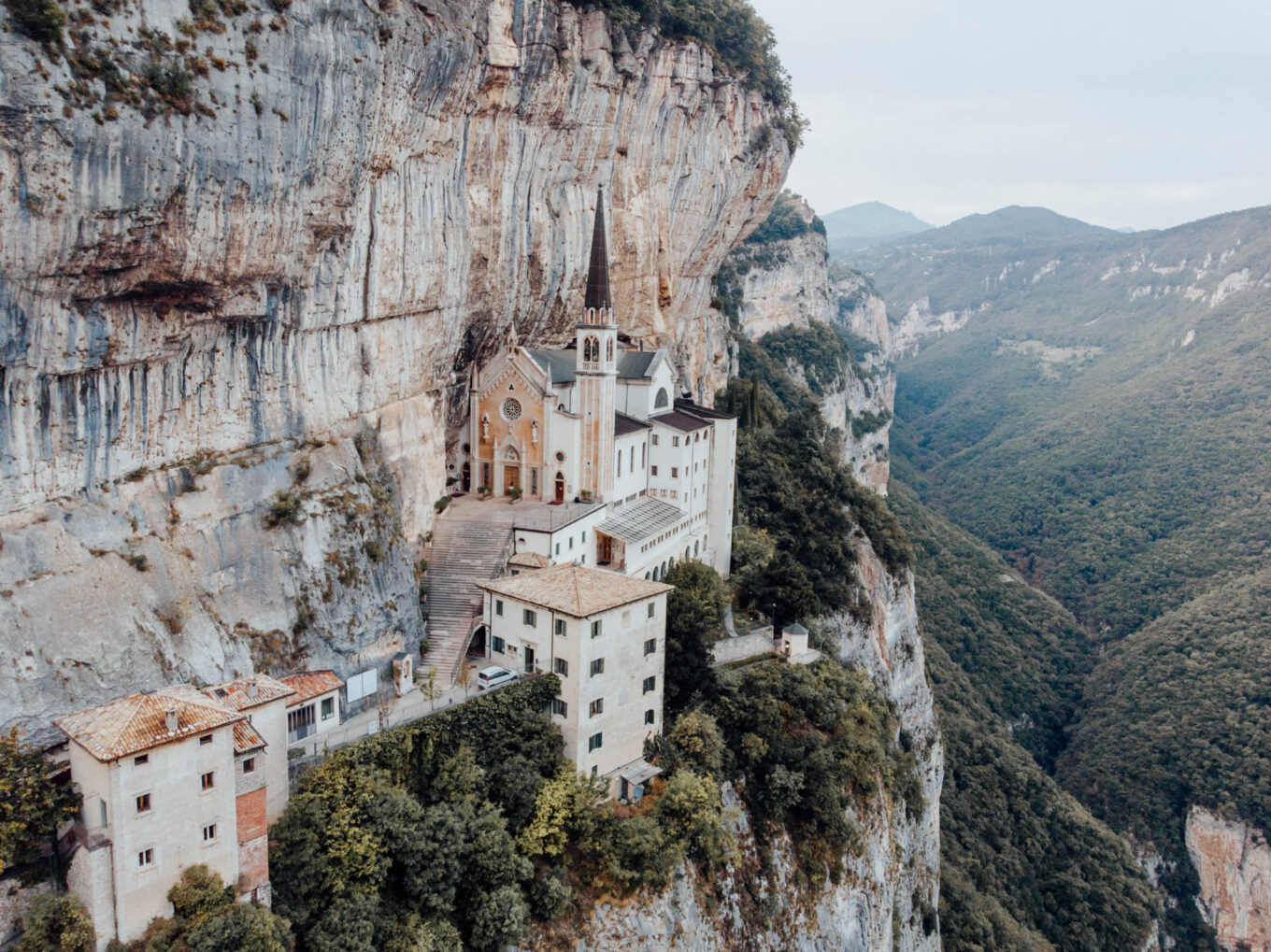 Santuario Madonna Della Corona, literally translated as Sanctuary of the Lady of the Crown, is a pilgrimage that settles on the side of the cliffs of Monte Baldo. The Sanctuary has been there for over a thousand years and is known for its breathtaking views, silent reflection, and steep hike to get there.

Between the rocks of the Monte Baldo mountain range, we can find the Sanctuary of Madonna Della Corona, a place of pilgrimage that – according to ancient literature – already existed before the year 1000. Numerous documents link the nearby Abbey of St Zeno in Verona to the monastery and chapel that was only accessible via a “dangerous narrow path in the rocks.” At this time, the Sanctuary was just a site where monks came for silent contemplation.

It was not until the mid-13th century that a monastery with a chapel was actually built to honor St Mary of Montebaldo. From then on, it took until 1530 for the first version of the church to be inaugurated, and two extra sets of steps were added, and a bridge was built.

It was not until 1625 when they started to build a new, large church. The existing church, which was located 4 meters lower, was reformed to the presbytery. Partly thanks to its unique location, it took until 1685 to finish the construction of the new church. Several new access routes were built during that period, together with more hospitality facilities to allow more pilgrims on-site.

Towards the end of the 19th century, the church was enlarged, and it got a new Gothic facade with various marble decorations. The end of these works was celebrated on 17th September 1899 with the ceremony of crowning the statue of Our Lady of Sorrows. In the successive years, the church’s facade was enriched with even more figures, and in 1922 the church bell tower was rebuilt.

In 1974 The Sanctuary of Madonna Della Corona underwent a complete and thorough restoration: the existing church was demolished, while the most important parts were preserved. During these restorations, they had to mine away parts of the cliff in order to enlarge the church with a new shrine and a new altar. To celebrate these renovations, it was declared to be a “minor basilica.” A few years later, On 17th April 1988, Pope John Paul II visited the Shrine and prayed to our Lady of the Corona.

Key facts about the Sanctuary of Madonna Della Corona

The church is open all year round; From November to March from 8 am to 6 pm and from April to October from 7 am to 7:30 pm.

Legends around the Sanctuary of Madonna Della Corona

According to an old urban legend, several inhabitants of the Adige Valley saw a dazzling light during the 10th century coming from the Monte Baldo mountain range. As they got closer, they noticed the phenomenon was coming from the cliff on the corona mountain. Captivated by the light and burning with curiosity, they decided to climb the hill to find out what caused this phenomenon of clear light.

After an exhausting climb to the top of the mountain, they decided to lower their bravest villager down the cliff with a rope to discover where the light was coming from. There they found the statue of Madonna, holding up the lifeless body of Jesus. Because the villagers liked the figure so much, they decided to take it to their valley and display it there in the church for all to see and worship.

The story of this miraculous statue was doing the rounds, but when the locals wanted to admire it the next day… but it was nowhere to be found. It wasn’t until they decided to look back at the top of Corona cliff that they found it.

The villagers decided to move the statue again, but unfortunately: it kept disappearing to the rocky cliffs. The only solution they could think of was to build a chapel and a shrine on the spot to which the statue kept returning… and that’s how Madonna Della Corona found its origin.

Our visit to the Sanctuary of Madonna Della Corona

We visited the Sanctuary of Madonna Della Corona as part of our Camptoo road trip, during which we traveled through Europe for a week in a campervan and visited stunning places such as Wegelnburg, Schloss Lichtenstein, and Veves Castle.

We parked our campervan in the city of Spiazzi, in an empty parking lot … which was actually off limits for mobile homes and campervans. We figured out the locals wouldn’t mind, since we were the only tourists visiting the city during that cold November day.

While we were exploring the area around the sanctuary, our electronics were charging in our motorhome using the Ecoflow River Pro power station.

How to reach the Sanctuary of Madonna Della Corona

To this day, pilgrims can still hike to Santuario Madonna Della Corona following the two-hour hiking path from neighboring the town of Brentano.

Nowadays, there is an easier way – but unfortunately still quite challenging: they can drive up to the city of Spiazzi and then walk up to the church. This can be done via a 1-kilometer trail or via several steep stairs. The trail follows 14 different bronze statues representing the crucifixion of Jesus.

When to visit the Sanctuary of Madonna Della Corona

The Sanctuary of Madonna Della Corona is located in such a unique place that it is always worth a visit. Please note tho: due to its location, it is not unusual for the sanctuary to be completely surrounded by fog. In foggy or rainy weather, the stairs to the sanctuary are also extremely slippy.

If your goal is to visit the inside of the church, you can also visit it all year round; from November to March from 8 am to 6 pm and from April to October from 7 am to 7:30 pm.

What to do at the Sanctuary of Madonna Della Corona

Since the sanctuary is located in such a unique place, and mainly intended for pilgrims, there are not a lot of tourist activities. There is a souvenir shop, and in the Spiazzi there are several tourist restaurants.

The main activities at Sanctuary of Madonna Della Corona are:

Other attractions near the Sanctuary of Madonna Della Corona

What to pack when visiting the Sanctuary of Madonna Della Corona

A visit to the Sanctuary of Madonna Della Corona and its surroundings can quickly take up a half a day, making it handy to bring some essentials with you.

The first thing you’ll have to consider when visiting the Sanctuary of Madonna Della Corona, is the fact that it’s quite a hike so you’ll only want to bring the essentials. We recommend bringing a zoom lens if you want to photograph the church from a distance, and a wide angle lens for when you’re standing right in front of the church.

The second aspect you’ll have to keep in consideration is the fact that the mountain is often surrounded by fog, so you will not always have the opportunity to take a nice and clean photo … which was also the case during our visit.

The area is marked as a no-fly zone, which is also clearly stated on the surrounding fences. Nevertheless, you can find several drone images of the sanctuary online.