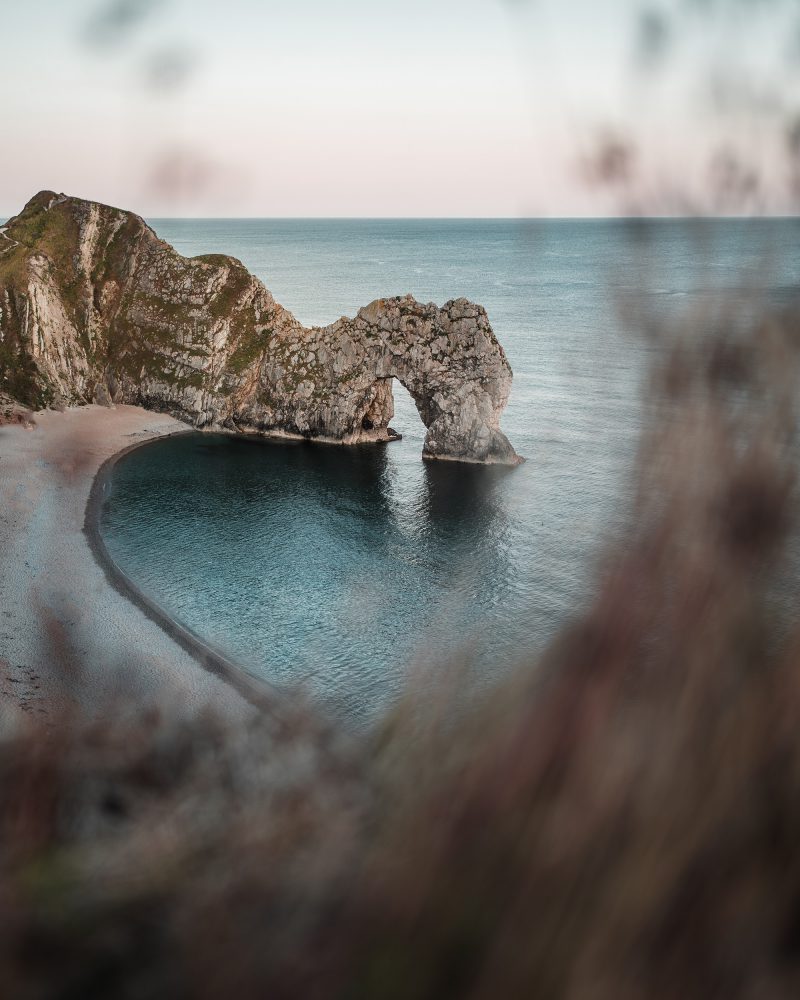 In this article, Ben shares several useful and practical tips for photographing this amazing landmark.

The Durdle Door is an impressive limestone arch standing in the sea and located on the famous Jurassic Coast of Dorset, UK. While it’s one of the UK’s most important natural landmarks, it’s also surrounded by several other unique and majestic landmarks.

How was the Durdle Door formed?

The pressure of the waves around the rocks caused the erosion of the limestone, which created a hole in the center of the cliff. That’s also how the Durdle found its name: because nature pierced its way through the rocks like a drill, which led to an old English word thyrel.

Over the span of centuries – and through evolving dialects – “Thyrel” was changed to Durdle.

Stretching from Exmouth to Studland Bay Dorset, the 95 miles of Jurassic Coast represents millions of years of the Earth’s history. Which created some majestic landmarks, including:

Other interesting locations that are part of the Jurassic Coast, but might be more convenient to visit if you have a car at your disposal:

Tips for visiting Durdle Door in 2021

Because landscape photography might seem like black magic for some of our adventurous readers and aspiring photographers, we asked local photographer Ben Ingram to tell us more about the photos he took and how he found the right angles.

“The Durdle Door is actually located less than 15 minutes from my home, so it’s my most favorite spot for sunset photos! For this specific set of pictures, I had to hike over various hills to reach this point-of-view and just loved the way the beach curved into the shot.

But honestly? The Durdle Door is a fantastic location for photographers, since it offers such a variety of shots through the changing seasons!

If you catch sunrise in the winter, you can see the sun rise exactly through the Door itself by shooting from the beach. And when you’re shooting the sunset in the summer, you can catch the golden hour lights on-top of the Door itself as well as the surrounding headland.

And it’s not only the weather conditions that are making this location interesting, it’s also a great place to try and create different interesting compositions: if you have a wide angle lens, a popular shot is to catch the winding stairs leading the eye into the frame and towards the Door. Otherwise, you could climb the hills further on and shoot the landmark from a height… just like I did for this gallery!”

When we asked Ben for more tips to re-create this particular shot, he told us that timing is everything!

“I had arrived on location around 10 past 8 in the evening, and as you can see the golden light had passed the Door itself, but it was still creeping up the headland behind it. So if you would like to catch the light on the Door … make sure to give yourself plenty of time to park up at the car park and take the walk down the path!

Please be aware: because of the COVID / social distancing measures, the path from the car park has been made extra long.

My best tip for shooting Durdle Door is to give yourself plenty of time, since the car park can be quite expensive and it can be a 10 minute walk from the car down to the Door.”

Ben also mentioned he uses a Sony Alpha A7III, so we decided to list his gear below:

Ben Ingram is a 21-year-old photographer and videographer from the South Coast of the UK. He graduated university in Media Production and is now a full time creative freelancer specializing in photo and video. Next to landscapes, he is specialized in portraits and street photography.